Meet Kennedy Gayah; a rotaractor who needs no introduction within the expansive Rotary District 9212 (Kenya, Ethiopia, Eritrea, and South Sudan) – and even beyond. Why you ask. Well for various reasons – among them, he is the only guy whose name starts with article “The”!

So pull a chair. We are going to need more wine for this story.

By the time The Kennedy Gayah was visiting his club, the Rotary Club of Nairobi Central on Tuesday the 18th May, 2021, the excitement was off the hinges! The meeting had been christened “A Family Affair” and the whole RCNC family had cleared their Tuesday evening for this visit. It’s not every day that at club hosts the reigning District Rotaract Representative (DRR) and even better, it’s not every day where the sitting DRR is a member of your club.

Back to the historic meeting. After Rotary pleasantries and introductions under the guidance of President Nominee Steve Maina, DRR Gayah began his maiden speech at the club by extending his felicitations to RCNC for scooping various awards during the coveted Sam Owori District 9212 Annual Awards. The awards are geared towards recognizing and honoring efforts and activities by individuals, Rotary and Rotaract clubs that achieve excellence, every year.

As fate would have it, in the Rotary year 2020/2021, DRR Gayah found himself in a difficult situation. “What happens when your club wins awards when you are the DRR?” This saw him recall the list and the number of awards RCNC won, requesting that the awards committee recheck and ensure there was no flaw. He insisted on running the process once again for a final clarification and true to their word, the awards committee reverted with the same numbers, reasons, and justifications for every award. This made DRR Gayah ecstatic and he congratulated the club and President Ambrose for his exemplary leadership. “As a club, we are heading in the right direction but can always do more” DRR Gayah added.

Kennedy recalled how the year unfolded as he served at the highest leadership role in Rotaract, the DRR. Last Rotary year, he was just made the DRR elect and he prioritized de-stereotyping the DRR seat to be one of the simplest and easiest jobs any Rotaractor can do by the time he left office.

As he assumed the DRR post, Gayah wanted to promote and empower Rotaractors in District 9212 with knowledge and information and make the district as big as possible and further, delocalize roles and delegate them to as many rotaractors as possible. This would give the district a distinct vision and for it, DRR Gayah and his District committee team stitched a 3-year strategic plan. The plan was anchored on 4 key pillars; catapulting Rotaract into exponential growth, rejuvenate clubs within the district with new energy, enhance partnerships and map out a strategic path towards success and fun in service.

The COVID-19 pandemic brought the world to a standstill and Rotaract was not spared either. The rolling out of a new Rotaract curriculum, which had just been created, was consequently canceled. The much-awaited District Conference and Assembly had to be canceled. However, DRR Gayah came with a dosage of inspiration and encouragement where he urged clubs to tailor-make their fellowship model, by adapting from physical to virtual meetings. At the time, the idea sounded far-fetched but almost one year later, this is the new norm.

Looking back, it is an accomplishment. We had to realign everything to adapt to the new change. Clubs are meeting virtually with the same cohesion and energy as physical meetings.

On a more positive note, DRR Gayah narrated his experience as one of the two Africans who graced the 2020 Rotary International Assembly in San Diego, USA. How exquisite!

According to DRR Gayah, the year 2021thus far has been an encouraging year owing to the formation and chattering of various clubs in the District. By the penning of this article, 17 new clubs have been chartered this Rotary year bringing our total cumulative figure to 120 Rotaract clubs in District 9212. Even with COVID, we have grown to 17 newly chattered clubs, and yet 4 more clubs are in the pipeline stage, bracing for the elusive charter. Compared to last year where the district had charted 16 clubs, we can confidently say that District 9212 is moving forward, on high gear (or steroids LOL).

Switching matters to internal issues, DRR Gayah commended RCNC for churning out first-class leaders. As a district, a new crop of leadership is unveiling, with the incredibly organized virtual district conference – a 3-day show case of what he termed to be “brilliance”. This was heart-warming

As we unwrap the new rotary year, RCNC has gone through a transition where members left and others joined. With a club boasting 42 years of an expansive member and alumni network, RCNC was tasked to continue upholding innovation and leading from the front. DRR Gayah specifically cited the immediate past two presidents for their relentless efforts towards the creation of a stronger and more firm foundation which allowed the club to jump into new opportunities.

The district had an ambitious target to ensure that every member contributed at least a dollar to the Rotary Foundation in the year 2020/2021, and DRR Gayah confirmed that his team had gracefully and proudly achieved this. However, he confirmed that the stakes were higher in the subsequent year as RCNC is gearing to clinch a global grant from Rotary International. He took members through the rigorous process of applying for a global grant and what this meant for the RCNC family. “We want to set up a very good project that can qualify for a global grant. These are projects that have a minimum budget of $30,000 and we need to think about how RCNC can transition to that level. This year alone, we allowed Rotaract clubs to get district grants up to $2,000. Unfortunately, no Rotaract clubs have qualified for that. However, RCNC has not applied for it” DRR Gaya disclosed.

Good news everyone! Come 2022, Rotaract clubs will be able to access global grants directly from Rotary International. This is the challenge DRR Gayah invited RCNC to identify and carry out a feasibility study of such a scale and magnitude, identify the opportunities the club holds in its dynamic membership, and the kind of skillsets the club currently boasts of.

DRR Gayah called on RCNC to give back to society by providing mentorship to other budding clubs and guide them on how to enhance effective working structures and coming up with guiding documents such as the detailed RCNC Finance manual. This mutual mentorship based on trust and respect would allow other clubs to grow to the level of RCNC, and even beyond!

The RCNC Public Relations arm was also cited as a strategy towards growing to the next level by DRR Gayah. He called upon the club to scale up and realign its thinking not for a district-level but for the global arena.

“Our Membership program at RCNC is one of the best in the district, it’s only rivaling with the Rotary Club of Langata. We need to spruce it up and make it a benchmark level for other clubs in the district”

By the time the meeting ended past 9 pm, DRR Gayah was oozing wisdom and everyone who had tuned into the meeting was brimming with inspiration.

Yes. This is DRR Kennedy Gayah and you just can’t make this up! On behalf of the great Rotaract Club of Nairobi Central, I say thank you for visiting your family. So long!

Guest at the Rotaract Club of Nairobi Central. 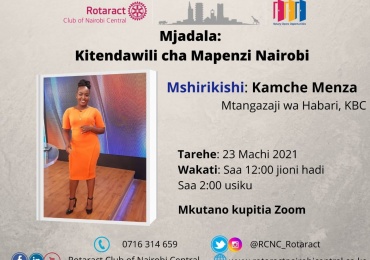